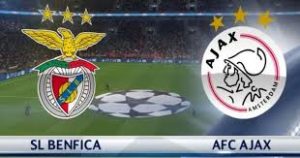 Benfica welcomes Ajax in a game from Group E of the Champions League. What’s happening with these two legendary clubs in the competition so far? Let’s see.

Benfica are currently 3rd in the group with 3 points won. The Portuguese club have 1 win and 2 defeats since the start of the group stage. The Eagles are currently on 4 points behind the leaders Ajax and Bayern Munich, so they really need to win this game in order to keep their chances of progression alive.

Just 2 weeks ago these two teams met in Amsterdam. The game was about to end with 0-0 draw, but Ajax’s Noussair Mazraoui decided everything with a late goal in the injury time of the match. He had some luck, because the ball took a deflection, which surprised Benfica’s goalkeeper Odisseas Vlachodimos. It was a lucky win for the Dutch team, but win is still a win, right?

This result put Benfica in a really complicated situation. The club’s goal is to progress to the 1/8-finals, but now they are in a “all or nothing” type of situation. Everything, but a win against Ajax most surely would mean that they will not reach the next phase.

Ajax on the other hand are leading the group with 7 points, being on par with Bayern Munich, but having a better goal difference. So far the Dutch team is unbeaten in the competition – 2 wins and 1 draw. They are aware that even the draw in Lisboa would be a good result for them from a strategical point of view. But it doesn’t mean that Ajax are going to play for a draw. This is a very dangerous strategy.

That’s it what we think about the Champions League clash between Benfica and Ajax in Lisboa. Good luck!