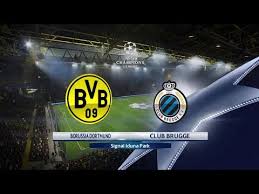 Borussia Dortmund welcomes Club Brugge in a game from Group A of the Champions League.

Borussia Dortmund are currently leading the group with 9 points won and a record of 3 wins and 1 defeat. Their only loss in the group so far came against Atletico Madrid at the Wanda Metropolitano in the previous round. But they are still topping the group, having the same amount of points as Atletico, because of a better goal difference. Before losing to Atletico, Borussia Dortmund enjoyed three consecutive wins in the group.

In the previous round of the group stage Borussia Dortmund visited Atletico Madrid at the Wanda Metropolitano. The Spanish side had a lot to avenge for after their 0-4 defeat at the Signal Iduna Park. But this time Lucien Favre’s boys were beaten, thanks to goals from Saul and Antoine Griezmann.

Despite of this loss, Dortmund are still in a pole position to win the first place in the group. All they have to do is win their remaining two games against Club Brugge and Monaco.

Club Brugge on the other hand are 3rd in the group with 4 points won. Their main goal right now is finishing third and continuing in Europa League. Right now Brugge have 3 points advantage in front of Monaco in the group.

In their last game Brugge enjoyed a 4-0 win against Monaco at the Stade Louis II. It was a terrific win for the Belgian team. Hans Vanaken scored a brace for Brugge, while Wesley and Ruud Vormer also scored for Ivan Leko’s team.

We won’t surprise you by telling you that Borussia Dortmund are the heavy favourite in this clash. How we said, the German team is fighting to finish first in the group, so were they will be playing only to win.