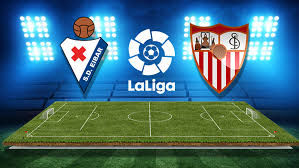 Eibar welcomes Sevilla in a match from the 7th round of the Spanish La Liga. We are about to take a look at this clash at the Estadio Municipal de Ipurua.

Eibar are 12th in the league standings after 6 games played so far. They have 7 points won so far and a record of 2 wins, 1 draw and 3 losses.

In their last game Eibar suffered a 0-1 defeat during the visit to Espanyol. Before this, they were enjoying a run of three matches without a defeat, winning in two of them against Real Sociedad and Leganes.

Last season Eibar had a good campaign and finished without a problem in the middle of the table. Now the goal in front of them is pretty much the same – to make a solid season and avoid being locked in a fight against relegation.

Sevilla had some difficulties in the start of the season, but Rojiblancos are starting to find themselves. After two consecutive losses against Real Betis and Getafe, now Sevilla are enjoying a run of two consecutive wins against Levante and Real Madrid. In these two matches Sevilla managed to score the impressive 9 goals.

But the most impressive thing was the 3-0 win over the European champion Real Madrid on Wednesday. Sevilla played a brilliant game and didn’t leave any chances to the visiting team. The young Portuguese striker Andre Silva had a fantastic game and scored two goals in Thibaut Courtois’ net. Meanwhile Wissam Ben Yedder added one more for the home team.

This is our take on the La Liga clash between Eibar and Sevilla. Eibar are playing like a typical midtable team since the start of the season, why Sevilla are enjoying an impressive improvement in their form. Let’s see how they will do this time.