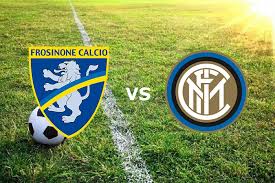 Frosinone hosts Inter in a game from the 32th round of the Serie A. Here are our thoughts about this clash, which is going to be played on Sunday evening.

Frosinone are in a very difficult situation at the moment. They are 19th in the league with just 23 points won so far, being on 7 points behind the 17th Bologna and the safe zone. They have some theoretical chance to survive, but they are going to need a really strong finish of the season in order to do this. Their overall record in the league so far looks like this: 5 wins, 8 draws and 18 defeats.

In their last five games in the league Frosinone lost three times, but right now the team is on a positive run with two wins in the last two games. After their win against Parma, they followed this with another win against Fiorentina at the Artemio Franchi. Daniel Ciofani scored the crucial goal in Florence. This win ressurected Frosinone’s chances for survival.

Meanwhile Inter are currently 3rd in the Serie A with 57 points, still in the fight for a Top 4 finish and return to the Champions League. At this moment the Nerazzurri have 5 points advantage in front of the 4th Milan and the same in front of the 5th Atalanta. In order to be sure about their finish in the Top 4, Inter must be very consistent until the end of the season.

In their last five games Luciano Spalletti’s boys won three times, made one draw and suffered one loss. In their last game in the league Inter shared the points with Atalanta for a 0-0 draw at the San Siro.

That’s our thoughts about the Serie A clash between Frosinone and Inter on Sunday evening. A game which is very important for both sides.