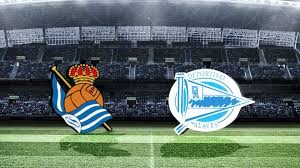 Real Sociedad welcomes Deportivo Alaves in a match from the 27th round of the Spanish La Liga.

This season has not been the best for Real Sociedad. Last year La Real played very good and qualified for Europa League. But now the Basques are much more shaky than they were last season. At the moment Real Sociedad are 15th in the La Liga standings with just 30 points won since the start of the season. Their record is showing 8 wins, 6 draws and 12 defeats – surely not good enough for a club with so much potential.

In their last match Real Sociedad made a 0-0 draw during the visit to Real Betis. Before that La Real won twice and lost twice – a perfect example how inconsistent are Eusebio’s boys this season.

Now Deportivo Alaves are coming to the Estadio Anoeta in San Sebastian.

Right now Deportivo Alaves are 14th in the La Liga standings, having one point more than their next opponent. Alaves’ record so far is 10 wins, 1 draw and 15 defeats.

This season Deportivo Alaves had some serious problems and for a big amount of time they were positioned in the relegation zone of La Liga. But with time their form improved and now they are 11 points above the relegation zone – a good reason to feel safe about their future in the league.

In their last five games Alaves are showing great results – four wins and one loss. This kind of results allowed this team to improve its position in the league and to get away from the danger zone. Alaves’ fans have all the reasons to be happy with the team’s performance lately.

Real Sociedad have the home ground advantage here, but based on current form and results, Deportivo Alaves are the team in a better shape.