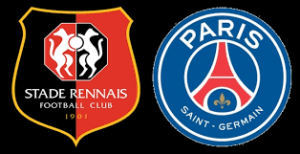 Rennes hosts the champion PSG in a match from the 6th round of the French Ligue 1. Let’s have a look at this clash, which is going to be played at the Roazhon Park in the city of Rennes.

Rennes had an average start of the new season. The team is currently 12th in the Ligue 1 standings with 7 points and a record of two wins, one draw and two defeats. In the previous round they suffered a 1-2 defeat during the visit to Nice. The home team scored an own goal via Malang Sar, but Nice managed to turn the game around thanks to goals from Saint-Maximin and Lees Melou.

Before losing to Nice, Rennes managed to record a second win for the season, beating Bordeaux at home.

Now for them it’s going to be very difficult against the champions PSG.

PSG started the new season in the most perfect way, winning all of their five matches so far. Thomas Tuchel’s boys are already showing what they can do, scoring 17 goals in these five matches and conceding 4. In the last round they managed to win against Saint-Etienne, crushing them with 4-0 at home. They even did it without the two stars Neymar and Kylian Mbappe.

During the week PSG had an unpleasant experience in the Champions League, losing their first game against Liverpool at the Anfield Stadium. But despite of this, PSG remain one of the favourites to lift the trophy.

As for Ligue 1, we highly doubt that anyone would be capable to stop Thomas Tuchel’s team. PSG are just too strong for everyone else in the French league.

These are our thoughts about the Ligue 1 clash between Rennes and PSG on Saturday afternoon. We wish you a good luck with this one.