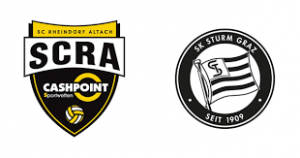 Rheindorf Altach welcomes Sturm Graz in a match from the last 36th round of the Austrian Bundesliga. Let’s have a look at this match.

Altach will finish 8th in the Bundesliga this season. Right now they have 37 points and a record of 10 wins, 7 draws and 18 defeats. In their last five games Altach are not performing very good – they won once against Mattersburg, but they also suffered four defeats against Salzburg, LASK Linz, St. Pölten and Rapid Wien.

In the previous round Altach suffered a heavy 1-4 defeat during the visit to Rapid. Adrian Grbic scored the only goal for Altach in the match, but it didn’t help his team to do something significant in the match.

Sturm Graz will finish second in the league. They didn’t have any chance to beat Salzburg for the title. Right now they are 14 points behind the champion, which shows how much better Salzburg are than everyone else. Sturm didn’t win the title, but at least they finished second. This will allow them to participate in the Champions League playoffs, which is also a good achievement.

Right now Sturm have 69 points and a record of 22 wins, 3 draws and 10 losses. In their last five games Sturm won three times (against Rapid, LASK and Admira), but also lost twice against Wolfsberger and the champion Salzburg.

In the previous round Sturm enjoyed a 2-0 win over Admira at home. Deni Alar and Thorsten Rocher scored the winning goals for the home side.

For sure Sturm Graz are the favourite here. They are the best team in the league after Salzburg, while Rheindord Altach’s performance this season was far from impressive. For Sturm it would be good to finish the season with a win, which would be third in a row for them.