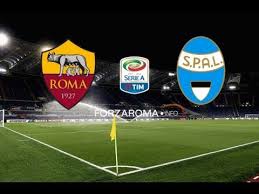 We are heading to the Stadio Olimpico in Rome, where Roma hosts SPAL in a match from the 9th round of the Italian Serie A. Let’s take a look at this clash in the Italian capital.

Roma are currently 6th in the Serie A standings with 14 points won so far. The Wolves have a record of 4 wins, 2 draws and 2 losses. They had some difficulties in the beginning of the campaign, but right now Roma are enjoying a run of three consecutive wins, recorded against Frosinone, Lazio and Empoli.

In the previous round of the Calcio Roma travelled to face Empoli and got back in home with a win. The goals in Empoli were scored from Steven Nzonzi and Edin Dzeko. Empoli tried to fight back, but in this match Roma were just the better team.

Roma’s manager Eusebio Di Francesco needs to be congratulated for the way he managed to handle the problems the team were having. Now Roma look like a stabilized team, which is ready to show its best qualities once again.

SPAL on the other hand are 14th in the Serie A standings with 9 points, which the club won in the beginning of the season. Right now SPAL are in a run of four consecutive losses, which is telling us that this team is having some serious problems at the moment.

In the previous round SPAL suffered a 1-2 defeat at home against Inter. Alberto Paloschi scored in Samir Handanovic’s net, but this goal was not enough for something more in the match. Inter still won, thanks to two goals from the team’s captain Mauro Icardi.

That’s what we had to say about the Serie A clash between Roma and SPAL at the Stadio Olimpico. Roma are the obvious favourite here, of course.