Torino welcomes Roma in a game from the first round of the Italian Serie A. Let’s examine this clash and see what’s going on with these two teams.

Last season Torino did well and finished 9th in the Serie A standings. Of course – it would have been better if the Bulls qualified for Europe, but being 9th is also a solid achievement for this club.

During the summer Torino made interesting deals on the transfer market. The club brought back M’Baye Niang to the Serie A, while they also signed the defensive midfielder Soualiho Meite from Monaco. Armando Izzo (Genoa), Tomas Rincon (Juventus), Bremer (Atletico-MG) and Nicolas N’Koulou (Olympique Lyonnais) were also brought in.

After reaching the 1/2-finals of the Champions League just a few months ago, Roma are ready for another impressive season. The club once again qualified for Europe’s best competition via finishing third in the Serie A. Now the goal is to do even better, if that’s possible. 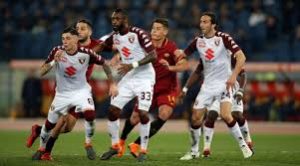 During the summer the Wolves made some very strong moves on the transfer market, buying the world champion Steven Nzonzi, the classy Javier Pastore and the bright Dutch talent Justin Kluivert. The team was also strenghten by players like Davide Santon, Gregoire Defrel, Robin Olsen, Ante Coric and Wiliam Bianda.

After such a strong presence on the transfer market, Roma can hope that they will do something important this season. Their great performance in the Champions League is going to raise their self confidence, that’s for sure. The club’s manager Eusebio Di Fransesco gained some important experience, which could help him a lot this season.

This is our look at the Serie A clash between Torino and Roma in the first round of the league. Roma are a slight favourite here, but have in mind that Torino have the advantage to play at home.