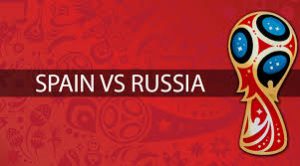 The teams of Spain and Russia meet each other in a match from the 1/8-finals of the World Cup. The game is going to be played a the Luzhniki Stadium in the Russian capital Moscow.

Spain finished first their group with a record of one win and two draws, managing to get ahead of Portugal. They scored five goals during the group stage, but also conceded five, which tells us that La Roja’s defense was not at its best level during the group stage. The manager Fernando Hierro would like to work on this phase of Spain’s game, because weak defense could hardly win you any silverware. Especially at the World Cup.

The host of the tournament Russia brought joy to its fans, managing to qualify for the 1/8-finals. Sbornaya won two of their three matches in Group A – against Saudi Arabia and Egypt, scoring the impressive 8 goals in these two games. Russia’s confidence was seriously shaken in the match against Uruguay, though, which Stanislav Cherchesov’s team lost with 0-3. But we should also remind you that the Russian team recieved a red card during this clash with La Celeste.

It seems that Spain’s manager Hierro is still trying to figure out which eleven players to use as a first choice at the World Cup. His biggest dilemma is which player to partner Sergio Busquets and Andres Iniesta in midfield. The two favourites for this position are Koke and Thiago Alcantara, which have started one game each in the group stage. Against Iran Hierro changed the formation to 4-5-1 and used Lucas Vasquez, but more likely he’d stick to the 4-3-3 in the eliminations.

Against Spain Russia will be without Zenit’s defender Igor Smolnikov, who was sent off during the clash against Uruguay. Meanwhile CSKA Moscow’s Alan Dzagoev remains sidelined until the end of the World Cup. Dzagoev had the bad luck to hurt himself during the opening match with Saudi Arabia.

Although they were far from impressive in the group stage, Spain remain a huge favourite to win the World Cup for a second time in their history. La Roja have an impressive team filled with great individuals. They are determined to make a step towards the 1/4-finals of the competition.

Russia showed good levels against Saudi Arabia and Egypt, but against Uruguay we saw that they have trouble when playing against a top team. Let’s see how they will do against Spain.

We believe that Spain are favourites against Russia in this clash from the 1/8-finals of the World Cup. Everything favours La Roja here – experience, class, individual level of the players. Of course, Russia have the advantage to play at home, but it’d be a major surprise if they manage to beat Spain. Everything in football is possible, though, so don’t be too quick to write them off. Just remember that Spain had serious trouble against teams like Morocco and Iran in the group stage.